Wanted to get this out before our next meeting, so here's a summary of what we talked about last time:

- The desire to establish groups that work on particular issues that may overlap with one another, but also have specific goals distinct from one another.
- The main groups or subcommittees thus far, with their de-facto leaders, would be as follows:
- Greenways Group led by Ian Webb
- Downtown Revitalization Group led by April Dahm and David Nelson
- Shreveport Community Gardening led by Jon Soul and Leia Lewis
- The idea that we have a Neighborhood Preservation group was floated as well, but there was some disagreement as to its mission and untility.
- A Civic Organization Networking group may have been suggested in its place.

- The need to begin a pilot project and get an immediate success on the ground that can demonstrate how a greenway would work.
- Bayou Pierre was discussed as the optimal site since it goes by through neighborhoods group members are most familiar with, where there may be the most likely users, we already know land-owners along the route, including Centenary College, with whom we have ties, and it goes by several other schools, including Montessori and Magnet High, where a number of group members have children who are students.
- Phases to the project might be:
1 - get permission from property owners to mow a path alongside the ditch
2 - wear it down to dirt with use
3 - cover with fine gravel (coarse is bad for bikes) to maintain it.

(It was mentioned that there used to be bridges crossing the bayou on the stretch between Alexander and Kings. It was also noted that Shreveport has gone through periods of conscious segregation by race and class, and removing the bridges may have been part of that.)

- Fund raising possibilities were discussed; many people and organizations would be willing to become "Friends of Shreveport Greenways," by making donations.
- The above is another reason why a separate non-profit may need to be set up whose mission is solely to promote greenways in Shreveport.
- A second reason for a separate non-profit may be insurance issues for events the group may want to organize that would promote greenways.
- A third reason may be to separate fundraising requests on behalf of greenways from those made on behalf of Centenary College.
- If ABetterShreveport is an "incubator" of civic organizations working in the public interest, it may be an appropriate and standard part of the process that separate non-profit organizations emerge from it, and its partner, the Center for Civic Engagement.
Posted by Loren Demerath at 3:07 PM 0 comments

Next meeting is Tuesday...

We'll continue last week's work planning our pilot greenway trail project, and talk about work this past week that Ian Webb and Jon Soul have done that complements it.

We'll also continue last week's work on creating an active downtown. It may be time for those interested in downtown to split off from the greenway folks and have their own discussion of long and short term goals. April Dahm and David Nelson have volunteered to help lead that group.

Come one, come all! The coffee will be hot n' fresh!
Posted by Loren Demerath at 8:24 AM 0 comments

The clean-up is scheduled for Saturday, February 7, from 9 am to 1 pm. There will be refreshments and possibly even live music to make for a festive atmosphere.

If you're interested in participating, bring a pair of gloves, sturdy shoes/boots, and, if possible, protective eyewear other useful items would include waders, a change of clothes, trash bags, and plastic trash cans)

Posted by Loren Demerath at 9:09 AM 0 comments

Written from New York, but even more true for Shreveport...

I've posted below a recent editorial Matthew Linn pointed me to, since it may be even more relevant to Shreveport than the author's reference of Long Island. Pedestrians and bikers are killed in our area for the same reasons, and proportionally, perhaps more often, since our environment is even less kind to those modes of travel.

A well-worn landscape like Long Island’s yields few surprises to the driver’s gaze. Shops cluster by size and species: pizza with bagels and nail salons, Home Depot with Old Navy. But one roadside incongruity that always unnerves me is the sight of a person outside the shell of a car on purpose — like a man pedaling slowly beside a highway on a bicycle.

Bicyclists and suburbs are an uneasy fit. I don’t mean the racing bikers who swarm like neon-colored beetles, hogging the middle of the road. I’m talking about the guys without helmets, on beat-up mountain bikes: restaurant workers wearing windbreakers over white dress shirts and ties; men in sweatshirts and baseball caps riding home from the store, plastic shopping bags hanging awkwardly off the handlebars.

Such sights are evidence of a valiant adaptation to a hostile environment. For immigrant workers, as with so many of us in the suburbs, life boils down to the job, the bed and the travel between. But when you live in a landscape designed for cars, and you are poor, and it is too far to walk to work, and there’s no bus to take you there, the only option is two wheels. This is what is cheap and effective. It can also be deadly.

On Christmas Day, a car going at least 80 miles per hour on Route 111 in Central Islip hit a bicyclist, Hector Rapalo. The driver sped off. Mr. Rapalo, a 39-year-old Honduran immigrant who worked at a pizza shop, died. Police said that the collision may or may not have been an accident, but that the driver surely knew that he or she had struck someone.

Immigrants ask for little more than the opportunity to work so they can send money home. Their lives are quiet but precarious, in a place that accepts their labor but offers little warmth or welcome. An inveterate hostility sometimes sinks into brutality, as in the fatal stabbing in Patchogue last November of Marcelo Lucero, an Ecuadorean immigrant set upon by a gang of teenagers.

The accidents they suffer go unnoticed, except when carnage briefly makes the news: Santos Javier Ramos, 21, a bicyclist killed by a car in Selden; Enrique Aguilar-Gamez, 26, fatally struck by a minivan while bicycling in Copiague; Adolfo Reyes, 42, a day laborer badly injured by a hit-and-run driver while on foot in Holtsville. The police in that case suspected a hate crime, because there were no skid marks or evidence that the driver slowed down after Mr. Reyes flew into his windshield, fracturing his skull, collarbone and arm.

Posted by Loren Demerath at 8:39 AM 0 comments

New Regular Meeting Time for ABetterShreveport: Every 2nd and 4th Tuesday Morning at 8:15. Come One, Come All!

Yes, it's settled. We've finally got a regular meeting time: the second and fourth Tuesday mornings of every month at 8:15 a.m., in room 206 of Centenary Square. Again, that's the building across the street from George's Grill, and if you enter from the parking lot in back, you can't miss us.

On the agenda for Tuesday, pending suggestions (all are welcome!), will be:
- Establishing our procedures for starting groups and subcommittees
- Starting the Greenways Subcommittee
- Crafting our pilot project route for the first new greenway
(Stacye Payne of the National Park Service, said in her first visit with us that we need to pick a spot where we can have some likely success. Would Pierre Bayou be the place? Perhaps with two branches, one going up into Highland and another along Youree?)
- Strategies for Making It Happen, Including:
- What grants to apply for next
- What events we might hold that would build interest in greenways
- What trails to build ourselves (in hopes of showing how they can work)
- What organizational structure we need to do any of the above

See you Tuesday!
Posted by Loren Demerath at 12:43 PM 0 comments

Tim wrote me recently about an idea he's working on that creates a pedestrian path of some sort between Allendale and downtown. Tim wrote, "The main driver of the idea was that the preliminary proposal for the Millennium Film studio project showed their yard right up against historic Oakland Cemetery. As I looked at trying to provide a "Historic Park" buffer between the project and the cemetery I noticed that Sprague Street would make a great pedestrian access point between downtown and a Historic Area (Historic Park & Cemetery & Municipal Auditorium). Then I noticed that if the trail kept going that it would get to Allendale, perhaps through a soon-to-be redeveloped area. Once in Allendale it could be hooked up to the linear park proposed by Kim Mitchell in his Allendale plan."

Here's the map drawn up by Tim: 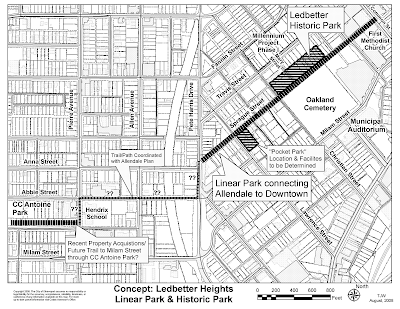 Cool, huh? ...For example, Livette? You out there? Would the Secretary of the Shreveport Historical Association care to comment?
Posted by Loren Demerath at 12:31 PM 0 comments