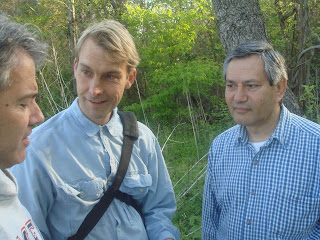 Jon Soul, Feico Kempff, and Loren Demerath spent a couple of hours last Sunday morning scouting a possible trail that would go between the Montessori School for Shreveport and Veteran's Park. 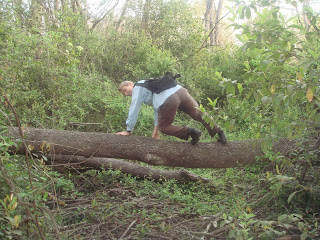 It was fun. One thing about hiking. It can be athletic!

Of course, if our goal is to entice people into walking and biking for transportation, we would probably want to eliminate such obstacles as the trail develops. For the record, Loren went under the tree.

Could students at Caddo Magnet High School someday use this school to get to school? Could this be part of a route that one could bike from Spring Lake to Veterans Park and the Riverside Bike Path? It's possible.
Posted by Loren Demerath at 5:11 PM 0 comments

Trail Scouting the Morning of Sunday the 22nd

Jon Soul and Loren Demerath are diving into the forest Sunday morning to scout a possible trail between the Anderson Bayou and Veterans Park. Anyone who's game is more than welcome to join us. We're meeting at the Montessori parking lot (2605 Galloway Blvd and Washington) at 7:15 and plan to be out by 9:15. It'll be a bushwacking adventure, so we recommend wearing long pants, a long sleeve shirt, etc.

Also, although yours truly couldn't attend due to flu in the family, I've heard we had a good meeting yesterday. Details to come.
Posted by Loren Demerath at 8:46 AM 0 comments

One of our discussions at our last meeting was about bike routes in the city, and we seemed to settle on the idea of having signs that would designate particular routes. This would avoid the problem of posting signs that say simply "bike route" and could imply that cyclists aren't fully welcome on roads that lack those signs--which is not true, legally. 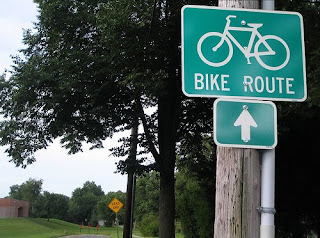 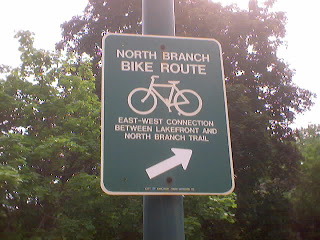 I'll be bringing Maurice's map of best routes for biking to our Tuesday meeting so we can plot specific routes. We'll need to consider common destinations and the layout of the overall network.

Also, for those who've heard Ian or I talk about them, here's a photo of a "conference bike". They say it's the world's best social lubricant, and that it works well for parties, tourists, as part of team building exercises, even for meetings. In my line of work, they might work well for urban sociology field trips! 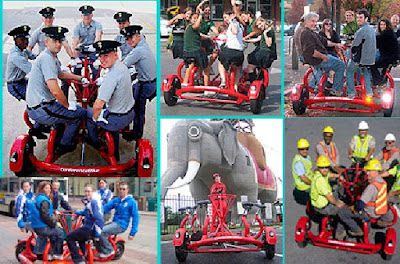 Sure are pricey, though, at about $10,000. Guess that's why now they're mostly seen as rentals. Austin has 'em, wouldn't you know.

Posted by Loren Demerath at 8:43 AM 1 comments

At the next meeting we'll work on identifying streets for particular bike routes, as well as naming them and identifying landmarks. We'll also review changes to Barbara's draft of the letter for construction and planning standards for biking and walking. And, we'll hear about the offer of some professional planners to help us with the greenways network. (Sound exciting? It is!) And, as always, there'll be more than that, including thinking about a new head for our greenways committee since Ian will be having to give up that position.

Join us!
Posted by Loren Demerath at 8:48 AM 0 comments

Check out a radically green lifestyle, Thursday, March 12 at Centenary

Adventure journalist and NPR contributor Doug Fine will present a funny and engaging talk and slide-show about his efforts to live carbon neutral on his ranch in southern New Mexico, Thursday, March 12 beginning at 7 p.m. in the Whited Room of Bynum Commons. The event is free and open to the public.

At age 36, Fine decided "to see if a regular guy who enjoyed his comforts could maintain them with a reduced oil footprint," and bought a parcel of land, dubbed it the Funky Butte Ranch and dug right into his greener lifestyle. During this presentation, Fine demonstrates with humor and perseverance the hard-won benefits of his new lifestyle in rural New Mexico.

Fine started with four simple goals: to use a lot less oil, to power his life with renewable energy, to eat as locally as possible and to not get killed in the process. In this memoir, Farewell, My Subaru, Fine shares his mishaps and lessons learned during his yearlong trek to turn his newly bought New Mexico ranch into a green and sustainable environment with as little carbon fuel as possible. From using two very lovable goats for his organic food production to transitioning into a biofuel engine for his truck and even installing solar panels, Fine balances the troubling decisions Americans must consider while also revealing a host of unexpected benefits.

An adventure journalist, Fine has logged time as a reporter in such places as Rwanda, Burma, Laos, Guatemala and Tajikistan. His first book, Not Really an Alaskan Mountain Man, documents a year roughing it in the wilds of Alaska. He is also a regular contributor to NPR, and has written for U.S. News and World Report, the Washington Post, Salon, Sierra, Wired and Outside magazine.