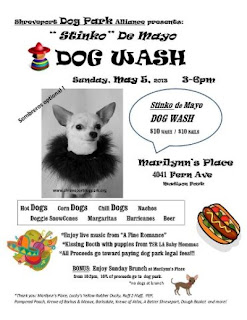 During the fiesta from 3-6pm Marilynn’s Place will sell Hot DOGS, Corn DOGs, Chili DOGS, and Nachos; wash them down with Margaritas, Hurricanes, Beer and more.  Doggie Snow Cones will be available for the dogs, PuP Cakes for people.

This wonderfully written is from ABS member Lani Duke.  Thanks so much Lani!  The possibilities are indeed numerous!

In the states to the north, farmers are digging out of the snow, planning to plant their cool weather crops like peas, carrots, radishes, lettuce, chard, but in Louisiana, cool weather farming has already come to an end. If they did not know a local home gardener, chances are Shreveport area consumers missed out on any and all of that fresh, flavorful, vitamin-laden produce.

Of the approximately 45 farmers markets and roadside stands in the 318 area code, only five have laid claim to being open year round: Hills Produce of Winnsboro; Morehouse Parish Farmers Market and East Fork Farm-Roadside Stand, both of Bastrop; West Monroe Farmers Market of West Monroe, and Bayou Rapides Roadside Stand in Alexandria. They all lie quite a bit to the east: 142, 127, 98.5, and 125 miles away, respectively. The Ruston farmers market is open "much of the year" only 70 miles east.

Most of the others figure that their sales season begins in June or later, depending on which crops they offer. Would they be open to planting a wider variety of vegetables and fruits with a longer selling season if more markets were open longer?

Some certainly would. For comparison, look at how new economic opportunities grew around a farmers market in central Vermont. Farm market vendors in Rutland used to figure that they stopped growing crops in time for a last market in late October. They might work on some pre-Christmas seasonal products, wreaths and decorations to sell at a couple of local bazaars, but the farm work was basically done until it was time to start seeds for spring planting. With a last frost date of May 18, he might have begun planting onion seeds in mid- to late February, then some cabbages, head lettuce, and parsley. A farmer who planned carefully might be able to take off two to four months before getting busy again.

That was until some enterprising farmers, recognizing what a large part of social life and weekly routine going to the Saturday farmers market had for local residents – and what a boost lengthening the farm market season might give their own finances, decided to try to keep the market open all year. Outdoors handling produce is no place to be in Vermont during the winter months, so, to stay open, the market must be indoors. Gathering volunteers, the farmers and their patrons began cleaning up and painting the interior of an old theatre only a couple of blocks away from the park that hosts the summer market.

When the summer market closed at the end of October, some of those same vendors began setting up their tables in the former Strand Theatre. Any Saturday during the winter, there would be 20 to 30 vendors set up and several hundred shoppers trekking through the barely heated, high-ceilinged space, buying potatoes and squash, radishes and carrots, eggs, apples, maple products, baked goods, and handmade crafts. And come summer, the same vendors took their goods back outdoors to the city's Depot Park.

Maybe the time was just right, and maybe customers really enjoyed having that market open each and every Saturday throughout the year, but the number of shoppers kept growing. More and more farmers, food makers, and crafters began wanting to set up at both the summer and winter markets. New agricultural entrepreneurs began operating in surrounding communities. Long-time market farmers began building more hoophouses, field-long mini-greenhouses each covering a single or double row. And they began to figure out what crops they could keep growing or at least holding on through the long Vermont winter. Those specialty farmers began enjoying rapid business growth.

So did the food product makers. A local home baker began selling at the market, offering three flavors – maple, rye, and whole-wheat -- of free-form, crisp wafer-thin crackers. Her business grew at 30 percent a year and was recently purchased by another specialty food company. And the food wasn't necessarily what you might call "New England specialties." Another vendor offered warm snacks made from her Argentinian mother's empanada recipe. Her neighbor dished up Korean-style vegetables and spring rolls. Others sold salsa and guacamole, dopyaza from Pakistan, samosas from India, pad Thai from the former Siam, and more.

And the shoppers increased. As the number of shoppers grew, so did the need for additional space at both summer and winter markets. The summer market expanded beyond its initial Depot Park location to spill into the neighboring parking lot and now pours across the pavement to take over a good portion of Evelyn Street each Saturday. And the winter market outgrew its initial theatre home.

Forming a non-profit organization, market vendors acquired a long-idle lumberyard about a year ago. They and their customers worked side by side through the summer, first clearing brush, then refurbishing an existing building to create a space for a well-lit, well-heated winter market. It opened November 3, 2012, with 50 vendor/farmer stalls, and has been full every Saturday since then.

Christened the Vermont Farmers Food Center, it expects a diverse future. Its board is bringing the local community food shelf and a branch of the statewide food bank onto the center's grounds. Eventual plans call for food storage space, freezers and walk-in coolers, and a commercial kitchen to be available for rent by food entrepreneurs. It may also include meeting space for educational activities.

The first step may well be finding a way to lengthen the farm market's open season. Right now it is open a few weeks during summer's most intense heat, at times when both shoppers and vendors are both uncomfortable and yet they come. A year-round market would keep customers plying the same shopping routes each weekend and go a long way to creating more stable markets for growers and entrepreneurs. If not immediately stretched all through the calendar year, perhaps it could expand that way in increments, a month or two now, adding more weeks over time. A stronger local agricultural/food sector economy strengthens the vitality of the entire city, and continually generates new business opportunities.

Should the farmers market find another downtown space, maybe even one with air conditioning? Or should it concentrate on opening sooner, perhaps during the spring so that it can operate alongside the string of early season weekend festivals? And slide over a little to fill up the sparse end of the Red River Revel in October? The possibilities are numerous.
Posted by Loren Demerath at 7:14 AM 3 comments