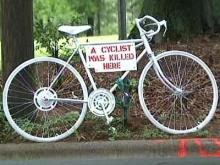 
DEATH IN OUR EXTENDED FAMILY OF LOUISIANA BICYCLISTS


Everyone at the meeting was very sorry to hear Maurice’s very sad news: his son-in-law’s 30 year-old brother, Nathan Crowson, was killed while riding a bicycle in Baton Rouge over the weekend. Nathan was riding on an arterial road at night, but in that area there is no
alternative. Nathan did not own a car and depended on bicycling for transportation. There will be a “ghost bike” placed at the position by BRASS in remembrance of the tragedy.


The group began to talk of frustrations with the city in its lack of planning and design for alternative transportation. To this day there is not a single bike lane in the entire city, even on newly built roads. Normally all that would be required would be painting the lines of the streets differently.

In discussing possible causes of this shortcoming it was noted that the Metropolitan Planning Commission apparently does not talk to the Community Development Office, contrary to what one would expect. The MPC seems to have a background in facilitating private development and does not attend to how general quality of life can be enhanced by using best practices. It was noted that the head of the MPC is a developer and the planner has come from engineering. It was speculated that the city may have underfunded the continuing professional development of the people in those positions. Paying for their attendance at conferences or workshops, for example, would have informed planning commissioners, planners, and engineers of the standard best practices for accommodating walking and bicycling. Indeed, when visitors to our city see no bike lanes, no bike paths, no dog park, little success in downtown revitalization and containing sprawl, etc., and when such things are standard in other cities, they’ll have to wonder about the quality of city administration.
The group decided to make a web page linked to ABS that shows not only what new roads look like, but how they could look using best practices, and, perhaps, to ask what is accountable for the discrepancy and how that can be changed. The title of the pages could be “Contrary to the Plan” considering that the Master Plan includes frequent mention of the need to accommodate bicyclists and pedestrians.


It was noted that other cities manage to carve out space for bike paths and bike lanes. In Orlando, Florida, Carolyn noted she could almost not find a street without bike lanes. She even got out of her car and measured street widths there and here, and discovered our streets are the same size.

It was noted that if the excuse shouldn’t be money; Portland, Oregon received federal money to put bike lanes on most of the streets in the city. Shreveport would have access to that money too, we just need to ask for it.
The bicyclist killed in Baton Rouge, Nathan Crowson, was a thirty year-old father of a five year-old. (I feel compelled to express what’s been said at ABS meetings often before: it is unnecessarily dangerous for people who choose to bicycle for transportation in cities such as Shreveport. Those people often chose to bike not for economy, or even for the clearner environment, but because it’s better exercise and more fun than riding in a car. Cities that take that seriously will rise to the top in quality of life and will grow. Cities that don’t, won’t, and that describes Shreveport to this point. If our city is going change, our city officials need to change, at least by learning what the best practices are in urban planning.)

DOWNTOWN MULTILEVEL PARKING GARAGE
Speaking of best practices, the group then discussed how certain best practices in parking have been used for downtown development. Ken noted that Lafayette has transformed its downtown with a parking garage that’s multilevel and free. Steph noted that the West Village of Dallas has one. Loren noted that Northampton, Massachusetts does too. Robert suggested there may be a sister organization in Lafayette that could send us a video snippet of Johnston St. in Lafayette to illustrate it. Lafayette is half our size, and Northampton is half of that (though Loren noted how those communities have more sizable proportions of a “creative class” connected with higher education than does Shreveport; Sociologist Richard Florida’s research shows that low-income college students and graduate students are often willing to live [and bicycle] as other members of the middle class are not). It was noted that Liz Swaine is having trouble with property owners in getting a parking garage. Maurice pointed out that the owners of the private lots will be enemies of any free downtown parking. The master plan talks about garages on the perimeter, or just behind the buildings along the main street.

PAYPAL TO COME
Cynthia mentioned that Paypal would help the dog park fundraising as well as projects ABS might want to raise funds for in the future. It was noted that doesn’t cost anything to set it up, but they take a small percentage of each contribution. It was agreed that we would do it; Carolyn knows how and will do it for us.

SPECIFICITY TO POSSIBLE PROJECTS NEEDED
It was noted that ABS has so many different projects and ideas to pursue, more members would help, and that we could do more to draw people into the group, and to specific projects. Centenary’s Office of Global Engagement has been one ally, pointing some students to our projects; Trevor Stine and his transportation mapping project for ABS is an example of that. Elizabeth Roselli, a Centenary Sociology Major who is doing an internship with ABS, is another example of the benefits of the Centenary connection the group has had.
Elizabeth noted that the blog and/or homepage could be more focused and describe more specifically what potential projects could be. Ken noted that a top ten list of projects might be good, and/or a list of achievements as well. Steph noted that we post an annual report with that kind of information, but they’re not ordered and numbered; it was agreed that such things could be more prominently featured. Steph suggested that we might try to create a “Prezi” presentation to present our top ten list of working ideas, to show who are, and what we’ve accomplished.
One project would be show through prezi presentation what all the different non-profit quality of life organizations are in Shreveport, to have faces of people display who work there with contact information, and to show how they overlap with each other in various ways. Another project is to post archived radio shows, and Loren promised to remind Michael Laffey about that.

ABS LANO BOUND
The group decided to join LANO (Louisiana Association of Non-profit Organizations). There is a monthly fee to pay, but we’ll get a professional trained treasurer out of it, as well as a variety of other resources. [Later in the week Loren ran into Leia Lewis at the run-throughs of the TedX Talks and she said she can present to ABS the system of resources she’s been developing for LANO. Loren promised the group would set aside a week to hear about it practice using it.

TOTAL RAISED BY DOG PARK WINE AND BEER TASTING TO COME
The group was happy to hear the total is likely to be around $12,500! Official tabulation to come!

TUESDAY TEDX ATTENDANCE AT COHABITAT TO REPLACE REGULAR MEETING
Without any prodding by Robert or Loren (really!) the group decided to not meet next Monday night, but instead attend the local TedX talks at Cohabitat (where Loren and Robert are both presenting). Cohabitat is at 610 Commerce St., one block west from the Barnwell Center. Admission is free. Loren will be presenting on how the dynamics of ABS help us understand how organizations provide energy, while Robert will be presenting on celebrating Mardi Gras DIY style. (The Asiana Festival and Leia Lewis' Sankofa will also be presented that night.)
Posted by Loren Demerath at 8:39 PM

TREKKING IN HIMALAYAS. India is a vast country with the Himalayan Range forming its northern boundary.

It is the liability of the businesses to notify the workers of the threats and problems associated with managing, shed and transport of certain detrimental components.